Wild Tamer is a new concept game that brings unique experiences you won’t find anywhere else. In the ancient world, people were not only busy looking for shelter or food but also faced many dangers that awaited every day. Besides harsh nature or disease, wild animals are one of the enormous challenges. However, tamed animals will bring many benefits, and you will have the opportunity to become a magician with powerful magic. You not only have a talent for predicting the future or knowing rain, sunshine, and danger but also have the ability to talk and tame wild animals. Although they are all ferocious animals, you still do not give up.

Coming to Wild Tamer, you will be able to enter the journey of discovery about the ancient world and witness many different animals. The animals in the game are incredibly diverse, from benign species such as mice, rabbits, cats, and dogs to more ferocious species such as wolves, lions, tigers, giant mammoths, and even mythical dragons in theory. You can ultimately conquer and tame many small and large species with your strength. The way to play is also quite simple because it follows the principle of Hammer and Scissors, like when playing rock-paper-scissors such as a cat will eat a mouse, an eagle will eat a cat, or a wolf will eat a rabbit. If you try to guess and arrange the squad accordingly, the probability of winning is very high. However, there will be times when you will be in a difficult situation, so try to overcome it.

It is also possible that you will have difficulty with an animal, not because you have no ability, but because you do not have enough beasts to capture it. You can think of a different approach in many different ways, so Wild Tamer requires ingenuity and sensitivity from the player. For each tamed animal in the squad, in addition to constantly changing their order, you must upgrade to make them fight stronger. Conquering animals in one land, you can open many other lands across the map and continue your journey. In addition, you can also increase the power of your mage character or learn a few new moves to capture beasts faster.

You are now ready to download Wild Tamer for free. Here are some notes: 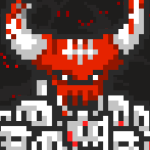