You will participate in intense battles with powerful opponents. Choose three characters from your warrior collection and accompany them into battle. The match is played in turn. Whenever it’s your turn, you can perform attacks or moves of your character to deal damage and reduce the opponent’s health sound, and when one warrior falls, another will come out and continue the fight. Perform charismatic exchange of moves and powerful attacks that the characters launch. Special moves will be slowed down, and the camera angle will be changed to increase the drama. At the same time, there are additional bone fractures and bleeding effects to show the great strength of the warriors. 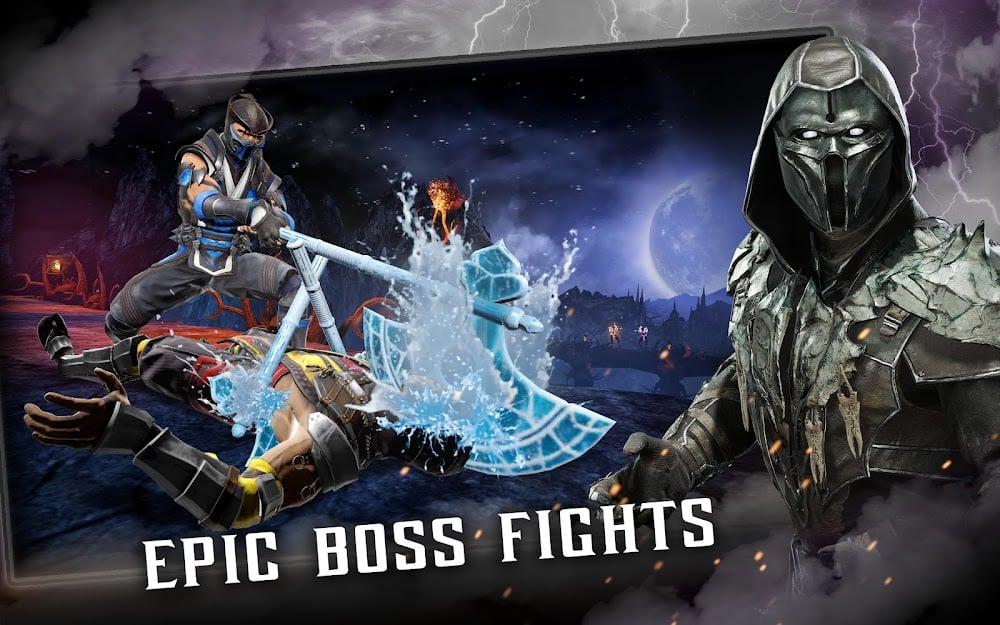 COLLECT POWERFUL WARRIORS AND PUT THEM INTO BATTLE FORMATION

More than 130 powerful warriors appear in MORTAL KOMBAT: A Fighting Game. You can collect them from various sources such as random spins, obtained from quests, or purchased. Each character possesses different attributes, weapons, fighting styles, and looks designed to be highly diverse and unique. Characters can be upgraded through experience gained in each battle, making them stronger by fighting opponents. Coordinate group characters to increase the whole team’s strength, such as Team Ronin, Team Nightmare, and Team Day of the Dead. Experience the moves from swords, martial arts, chains, clubs, or even the magic of the warriors. Recruit powerful characters to defeat all opponents of the game. The game offers many exciting tournaments and game modes that you can experience. Enter a series of matches against many different opponents. Win each war to move on and defeat the last enemy. Get many attractive rewards by conquering big tournaments, including getting new warriors. In addition, you can participate in competitions with your friends as well as win and take the top position on the player rankings. You will also receive valuable gifts if you keep a high rank on the weekly leaderboard. Dominate every game with a lineup of powerful warriors that you choose and nurture. Enjoy your absolute victory over every opponent and conquer every new goal.

You are now ready to download MORTAL KOMBAT for free. Here are some notes: