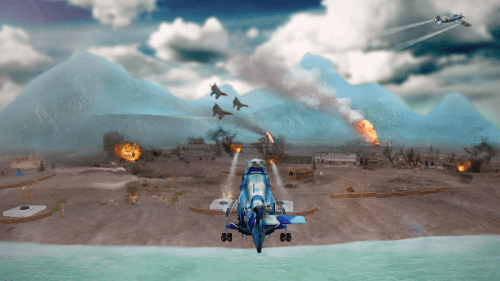 Gunship Strike 3D is a Helicopter battle action game where you shoot enemies with the help of a chopper attached to weapons. You are a pilot in your country’s military base and aligned for a war formed with neighboring countries. Prove your attacking strategies, shooting and destroying the terrorists and rival military bases. Choose your favorite Chopper; the game provides you with various choppers named Tadpole, Shamal, Raptor, Leviathan, Skimmer, Firefox, and so on, with properties like HP, Speed, Agility, and Auto Aim. To attach it to battle, you can check each strength in all properties and weapons. Unlock powerful choppers and upgrade them by earning more points.

There are multiple levels with a variety of tasks and challenges. Complete the lower levels to unlock the following levels to enjoy more fun. At the end of each level, you will receive the mission and destroy rewards. Mission rewards are the points for completing tasks in that game, like destroying towers, killing enemies, defeating the Boss, detecting areas, destroying tanks, etc. With the completion of the assigned tasks game will be complete. And Destroy rewards are the extra points you can collect in the game by damaging the enemy’s territories and weapons.

Helicopter controls are on the left side, weapons shooting on the right side, and top right side missions to complete arranged on your screen. And also, enemy location information and gravity change visual angles are displayed. Each gun is loaded with a limited amount of bullets to upgrade the gun’s aim and reload bullets. You can also use missiles in critical situations. Defend from the enemy’s attacks and collect medicines that float in the air to survive gunshots. Target is different in each level which enthuses the player to unlock more levels; in the Sneak Attack level, you will fight with Boss, destroy warships in Sea lane, detect areas to collect enemies data in Air Detection, etc. Keep on attacking the enemy’s arsenal at any cost and become a pro player in the game.

You are now ready to download Gunship Strike 3D for free. Here are some notes: