Five Nights at Freddy’s is a popular horror game where players will become the security of a pizzeria and protect themselves from animatronics. Players will discover stories related to these dangerous machines, and of course, they will try to track down possible anomalies through the camera. At the same time, players have the energy to use, and if it runs out, you are in danger. BECOME A SECURITY GUARD AT A PIZZERIA

In Five Nights at Freddy’s, the player becomes a security guard whose job it is to monitor what goes on inside this pizzeria every night until six in the morning. But things are not so simple when animatronics machines can move and are always trying to reach the player. Players will need to protect themselves against them with various actions and make good use of their energy.

The story of this game is not told clearly before the game screen but will be integrated through the times the phone you receive. A completely mysterious character makes the calls, and gradually, the player also learns the secret related to the pizzeria, which used to be the location of the murders. At the same time, the animatronics also have completely unusual signs and evoke links to the missing children involved in the case. During the gameplay of Five Nights at Freddy’s, the player will not move to any location and face dangerous machines. In other words, you will see everything through a camera that can see different activities in different areas. You also recognize the problems associated with these machines, and of course, if they move, you will need to take specific actions such as closing the door and turning on the lights.

The work that players need to do is understandable but sometimes still makes players feel scared. The color of the areas is black, and sometimes you will be startled by the animatronics’ appearances and changes in position. In particular, after realizing they have moved, you will quickly feel nervous and develop a corresponding solution. Therefore, players will face different challenges at each level. GOING THROUGH MANY DANGEROUS NIGHTS

Players will not only monitor the pizzeria for a single night, and every night, the player will always be in danger. They will try to protect themselves, complete the night well, and wait until six o’clock the following day to recharge. At the same time, the energy in this game is limited, and depending on the activities you do in the game, the energy will be consumed. If the power runs out, all the doors will open, and the animatronics will quickly enter.

You are now ready to download Five Nights at Freddy's for free. Here are some notes: 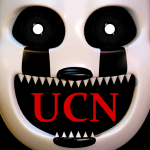